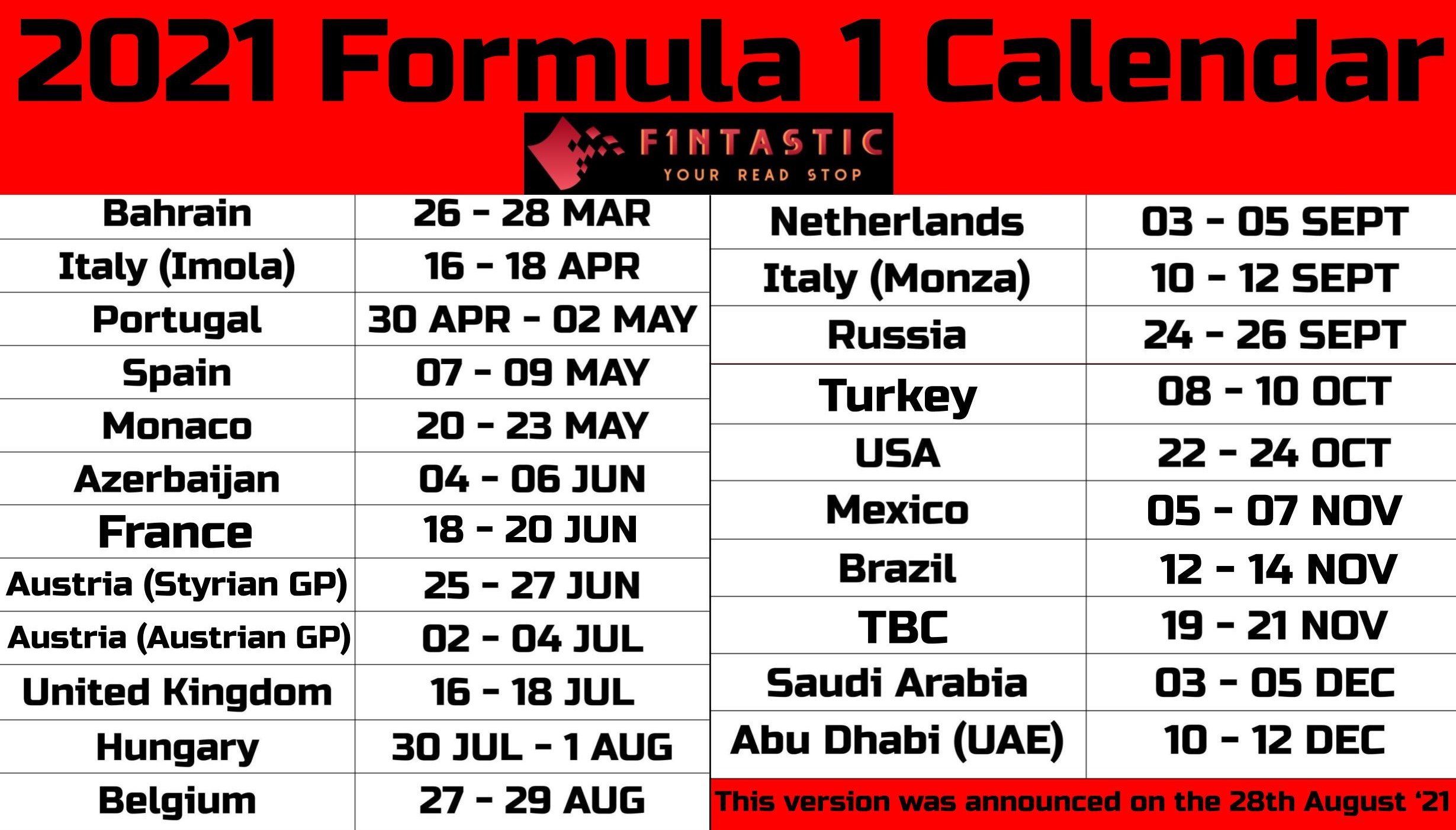 The calendar is currently undergoing changes that F1 are yet to confirm, relating to the 2021 Mexican, Brazilian and Saudi Arabian Grands Prix.

I’ve lost track of how many times I’ve had to update this page this year. Due to this unpredictable pandemic, F1 has been cancelling and reshuffling races and changing the calendar about a billion times. Currently, the most recent calendar change has been the cancellation of the Australian Grand Prix. It would’ve been an exciting race with new changes to the circuit, but the government in Australia just couldn’t give the go-ahead for the race. So now, let’s get into where F1 will be racing, and what kinds of exciting races the F1 2021 Race Calendar brings.

The F1 2021 Race Calendar consists of a record-breaking 22 races! It was originally set to be a 23-race calendar, but because of COVID-19 still raging across the world, F1 has had to make changes to the calendar to ensure that Formula 1 can still continue safely. F1 need to make sure that all races are carried out safely and within the regulations, which is why so many races are being cancelled and replaced. Formula 1 clearly proved that racing can be safe when they completed a 17-race 2020 Formula 1 Season.

The 2021 F1 Season begins at the Bahrain Grand Prix, as Bahrain hosts the season opener for the first time since 2010. Bahrain is also hosting Pre-season Testing this year, just 2 weeks before the Grand Prix itself. One of the things I have noticed in this calendar is that there are quite long gaps between races. Most races in 2020 were at back-to-back weekends, but in 2021, most races are not back-to-back. In fact, the 2021 Emilia-Romagna Grand Prix is a MASSIVE 3 weeks after the Bahrain Grand Prix.

After, there are a series of races in Europe, including a double-header. However, it would’ve been the Canadian Grand Prix. F1 had to cancel Canadian GP because of the mandatory 14-day quarantine period for travellers. F1 couldn’t afford to lose 14 days just because of quarantine, so they cancelled the race in Canada, and then they replaced it with a race in Turkey. However, they cancelled that race as well due to travel restrictions. So, F1 decided to push back the French Grand Prix to be a week earlier. That made space for the 2nd race in Austria. I think this is a better arrangement because it is less susceptible to unexpected changes to the calendar.

Moving forward to the final few races, those are the races where the Drivers’ and Constructors’ Championships are usually decided. Races like the US, Mexican, Brazilian, and Abu Dhabi Grands Prix. There is going to be a race on the 21st of November in place of the 2021 Australian GP. F1 have pushed back the Mexican and Brazilian GPs by a week, and are going to replace the Australian GP to complete the 22-race calendar.

And let’s talk about Saudi Arabia This addition is a new race and was planned to take place and was there in the original 2021 F1 calendar as well. The penultimate round in the F1 2021 Race Calendar is in Saudi Arabia. For the first time in Formula 1 history, there will be a Saudi Arabian Grand Prix, which will take place in the high-speed Jeddah Street Circuit. And finally, as usual, we’re going to end this season of Formula 1 under the lights at the Abu Dhabi Grand Prix. This season of Formula 1 is going to be intense, exciting, and one that you don’t want to miss!