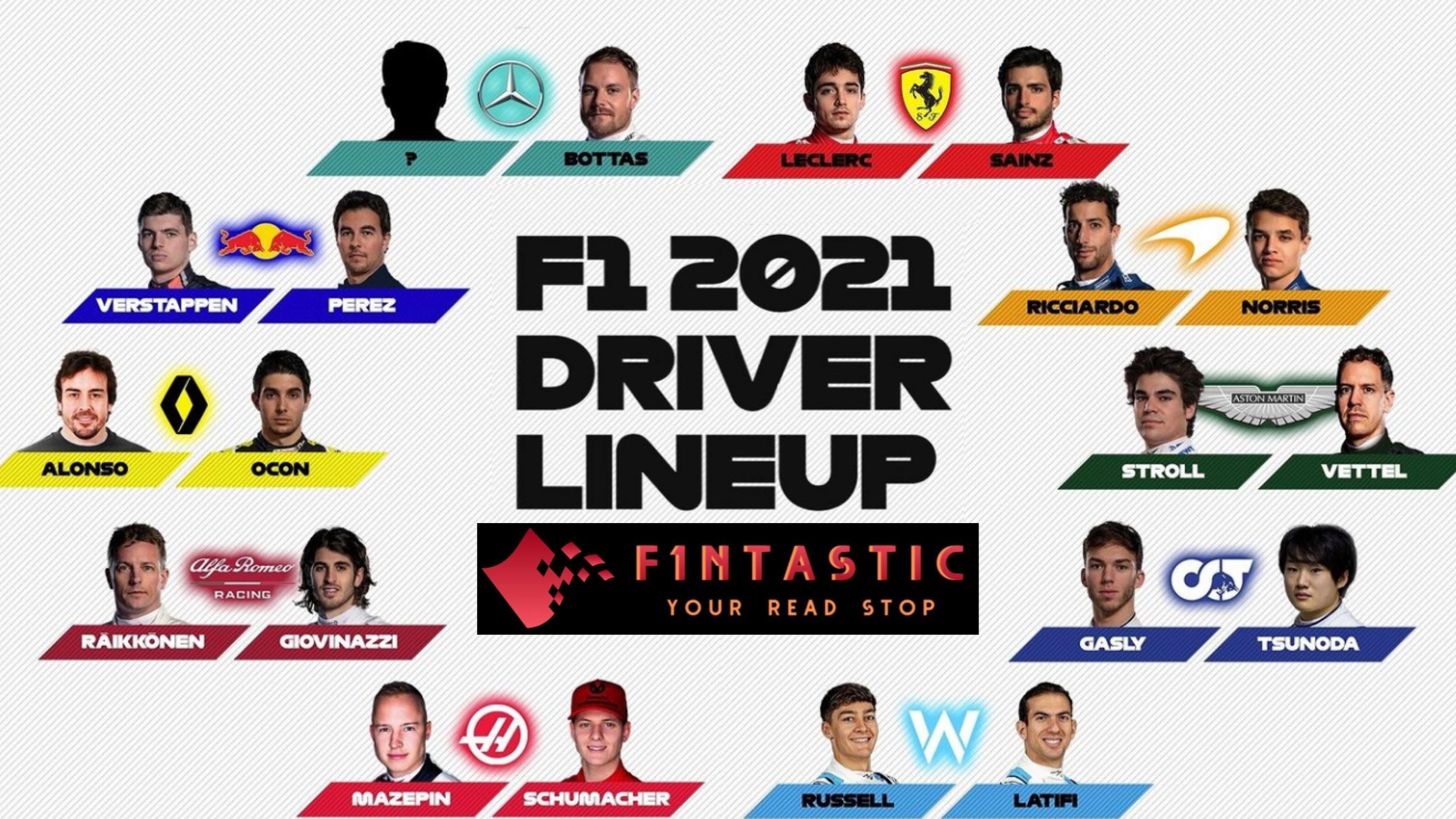 Welcome to the 3rd segment of F1ntastic.com’s Guide To Formula 1! This segment is all about the 2021 Formula 1 Drivers. In this page, we will explain which teams have which drivers in 2021. So let’s begin with a short introduction.

In Formula 1, there are 20 drivers who take part in a race. Usually, these 20 drivers are the only drivers to take part in the Formula 1 World Championship. The only time when any other driver drives in a race is when one of the original 20 drivers can’t take place in the race. For example, when Sergio Perez tested positive for COVID-19 in July 2020, Nico Hulkenberg replaced him for 2 races. On this page, we’ll be giving you basic information about each of the 20 drivers entering the 2021 Formula 1 World Championship.

We’re talking about Lewis Hamilton, the King of the 2021 Formula 1 drivers. He’s sitting at the throne of this list because he has been the Drivers’ World Champion for the last 4 years. It would’ve been 7 years if Nico Rosberg wouldn’t have broken Hamilton’s streak by winning the title in 2016. In total, Lewis Hamilton has a record-equalling 7 Formula 1 Drivers’ World Titles to his name. Michael Schumacher initially set that record when he won his 7th World Title in 2004. In 2020, Lewis Hamilton equalled that record, and in 2021, he’s looking to break that record, by winning his 8th Title.

Hamilton was born and raised in a small town called Stevenage, located in Hertfordshire, England. Born on the 7th of January 1985, Hamilton was 5 years old when his father bought him his first radio-controlled car. Hamilton is mixed-race since his mother is Caucasian and his father has Grenadian descent. Lewis’s own skin colour is more like his father’s. When Hamilton entered a racing club and started racing go-karts, he faced racial abuse. This shows why Hamilton has taken such a strong stand against racism. Racism is horrific, and it’s wonderful that Hamilton is fighting against it.

Hamilton’s Formula 1 career began many around 14 years ago in 2007. He was just 22 years old and had an incredibly successful junior career, where he repeatedly proved his unparalleled talent. McLaren, who had nurtured Hamilton since he was 13, signed the 2006 GP2 Champion to their F1 team. It only took Hamilton one race in Formula 1 to become an F1 sensation. Hamilton’s debut season in Formula 1 was arguably the most successful debut season in F1 history. He was only one championship point shy of becoming the youngest Formula 1 champion. But his loss didn’t last for long, because 2008 was a stellar year. Hamilton fought Felipe Massa to the line for the championship, even though the Ferrari was faster than the McLaren.

The fight went right down to the final corner. In the last lap of the last race of the season, Massa won the race. Hamilton was in 6th, meaning Massa was the World Champion. But then, into the final corner, a car had a mechanical issue, and Hamilton overtook that car to take 5th, which made Hamilton champion by one point. Incredible. Since then, Hamilton has won 6 more titles, all in the last 7 years. Michael Schumacher previously held the record for most Drivers’ World Championships, with 7 under his belt. Hamilton equalled that record in 2020 by winning the title.

In 2020, after equaling Schumacher’s record, Lewis Hamilton was Knighted by Her Majesty Queen Elizabeth II. The Queen Knighted Lewis Hamilton on the 30th of December 2020, as a part of the New Year’s Honours List. After winning his first World Title in 2008, Lewis Hamilton was awarded an MBE, which is stands for Member of the Order Of The British Empire. Lewis Hamilton also received an Honorary Fellowship of the Royal Academy of Engineering. So Lewis Hamilton’s full name is Sir Lewis Carl Davidson Hamilton MBE HonFREng! That’s a long name, full of evidence of a lot of achievement! To learn more about Sir Lewis Hamilton and his illustrious career, click here to visit the full page about Lewis Hamilton →.

To learn about the rest of the F1 drivers, click through the pages below.